The Bells on New Year's Day (Joya no Kane) 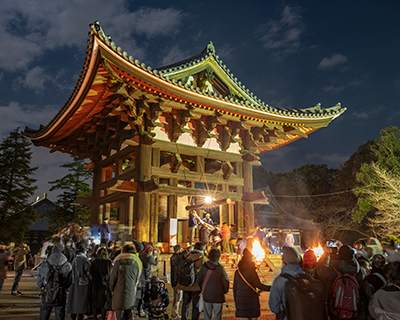 From 0:00 on January 1st, the Giant bell is rung 108 times at the Bell Tower. This ceremony is called “Joya no Kane”. The number 108 is supposed to be representative of the 108 worldly desires that a person experiences throughout the course of their entire life. At Tōdai-ji temple, a monk rings the first bell, and next, about 6 – 8 people ring the giant bell together once so about 800 people can ring the bell. From 22:30 on New Year’s Eve, numbered tickets are distributed in numerical order. If you would like to ring the bell, please start to queue up before 22:30 in advance to get a numbered ticket. Please note that if you leave the queue after you got a numbered ticket, you will not be able to ring the bell. 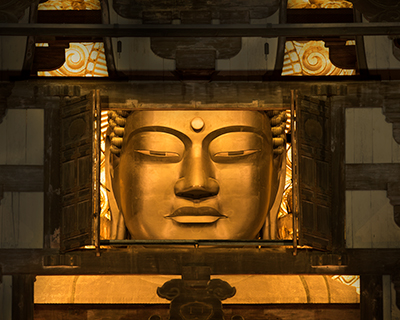 From around 0:00 on January 1st, 135 stone lanterns around Nigatsu-dō are lit from near Kagami-ike Pond, and a Kannon Sutras are chanted in Nigatsu-dō.
From this time on, for three whole days, many votive lights are lit in Nigatsu-dō.
7
13:00
Ceremony of the First Month
(Shushō-e)
Great Buddha Hall

Ceremony of the First Month (Shushō-e) 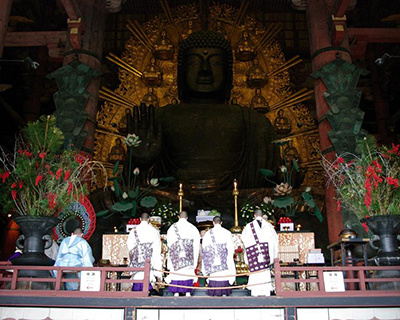 “Shushō-e” is held to repent for sins and mistakes, and to pray for a fruitful harvest of the Five Crops, and to achieve peace under heaven, in other words to guarantee the welfare of all living beings. The Buddhist service starts from 13:00 at the Great Buddha Hall.

3
10:00
Festival of the First Day of Spring
(Setsubun)
Nigatsu-dō Hall

Festival of the First Day of Spring (Setsubun)

“Setsubun” is generally celebrated on Fabruary 3rd in Japan. In the area around Nigatsu-dō and Hokke-dō, the following ceremonies are held.

The ceremony of “Gengu” is held at 10:00 at Nigatsu-dō. This ceremony is to burn talismans and amulets enshrined the previous year.

”Mamemaki” (Bean throwing” is held at 14:00 after the Buddhist memorial service at Nigatsu-dō. Parched soybeans are thrown to rid the buildings of bad luck by saying, “Oni wa soto! (Out with the demon!)”, and to bring in good luck by saying, “Fuku wa uchi! (In with fortune!)”． Beans will be distributed to visitors in front of Hokke-dō.

”Hoshi (stars)-Kuyō” is held at 18:00 at Nigatsu-dō. This Buddhist service is to pray to the stars to repel evil and bring happiness. During this spectacle at Nigatsu-dō, many votive lights are lit, and the star mandala is displayed on an altar.

Ceremony of the Buddha’s Birth (Busshō-e) 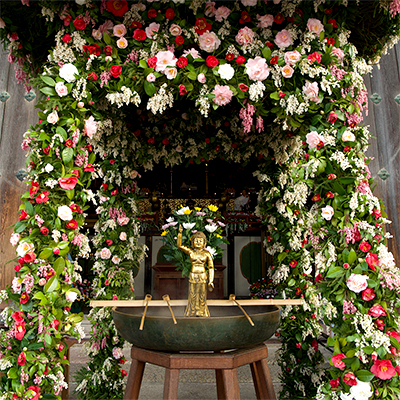 The Buddhist ritual “Busshoe” is held on April 8th to celebrate the Lord Buddha’s birthday. A “Hanami-dō” with colorful flowers, as ablution basin, is filled with sweet tea. In the center of the “Hanami- dō”, a statue(replica) of the “Buddha at His Birth” is placed and people ladle sweet tea with a dipper and pour it over the statue. This is based on Buddhist legend, according to which, when Buddha was born, nine dragons flew down from heaven and covering Buddha with honeydew. The original statue of “Buddha at His Birth” is enshrined at Tōdai-ji Museum and it was probably made around the time of the grand consecration ceremony that was held for the Great Buddha on April 9th, AD752. 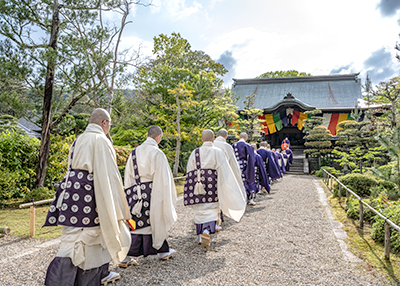 The Great Buddha (Vairocana Buddha) of Tōdai-ji Temple was created more than 1250 years ago through the combined efforts of many people, including Emperor Shōmu, Rohben, the first Chief Abbot of the temple, and the monk Gyoki who was able to regiment the efforts of the people through the solicitation of donations. This national project of constructing the Great Buddha was realized through Emperor Shōmu’s enthusiasm and faith as the driving force. This memorial service is for Emperor Shōmu, who passed away on May 2nd in 756 at the age of 56, and is held from 8:00 to around 11:30 at Tennoh-den, where Emperor Shōmu is enshrined. Normally, Tennoh-den is closed to the public, but on only this day, it is opened to visitors. In addition, a procession by monks and children is held from around 13:00 and a Buddhist memorial service is held upon arrival at the Great Buddha Hall. Around the same time, the traditional Japanese court music and dance Gagaku, and Noh play are performed on a special stage at Kagami-ike pond, which is open to the public.
3
8:30-
11:00-
Visit to Emperor Shōmu’s Mausoleum
Ceremony of offering green tea to Great Buddha (Urasenke Sytle)
Emperor Shōmu’s Tomb
Great Buddha Hall

In order to commemorate the great accomplishments of Priest Shunjōbō Chōgen a memorial service is held at Shunjō-dō. He passed away in 1206 at the age of 86. 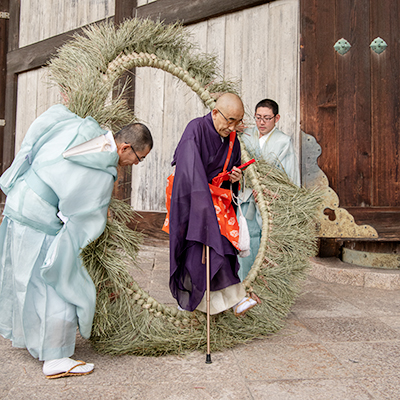 Cleaning of the Great Buddha (Ominugui)

Ominugui (Cleaninga the Great Buddha) is held in the early morning on August 7th. Approximately, 120 Buddhist monks and volunteers purify themselves at the Yuya (the temple bathhouse of Nigatsu-dō) before the Ominugui and wrap themselves up in white ritual clothing. A sutra is chanted at the beginning of the Ominugui to remove the Buddha’s spirit. And then, they start to clean the Great Buddha. Visitors can enter the Great Buddha Hall from 7:30. (Ominugui is held from 7:00 to around 9:00.)
9
Day of Special Merit
(Oyoku)
Nigatsu-dō

Oyoku is the annual festival of Kannon Bodhisattva, the principal secret image that is housed in the Nigatsu-dō Hall. It is believed that if we visit the Nigatsu-dō Hall and pray to the Kannon Bodhisattva on this auspicious day, we will receive the same merit as if you had made 46,000 prayers and exceptional fortune and benefits will be given. In accordance with worshipers wishes, a votive lantern can be offered to Kannon Bodhisattva on this occasion. Date & Time of Lottery: August 9th, 8:00– 19:00 (Note: Valid only on August 9th in that year)
Price of 1 votive lantern: 500 Yen (1 lottery ticket is distributed)
14 & 15
17:30-21:00 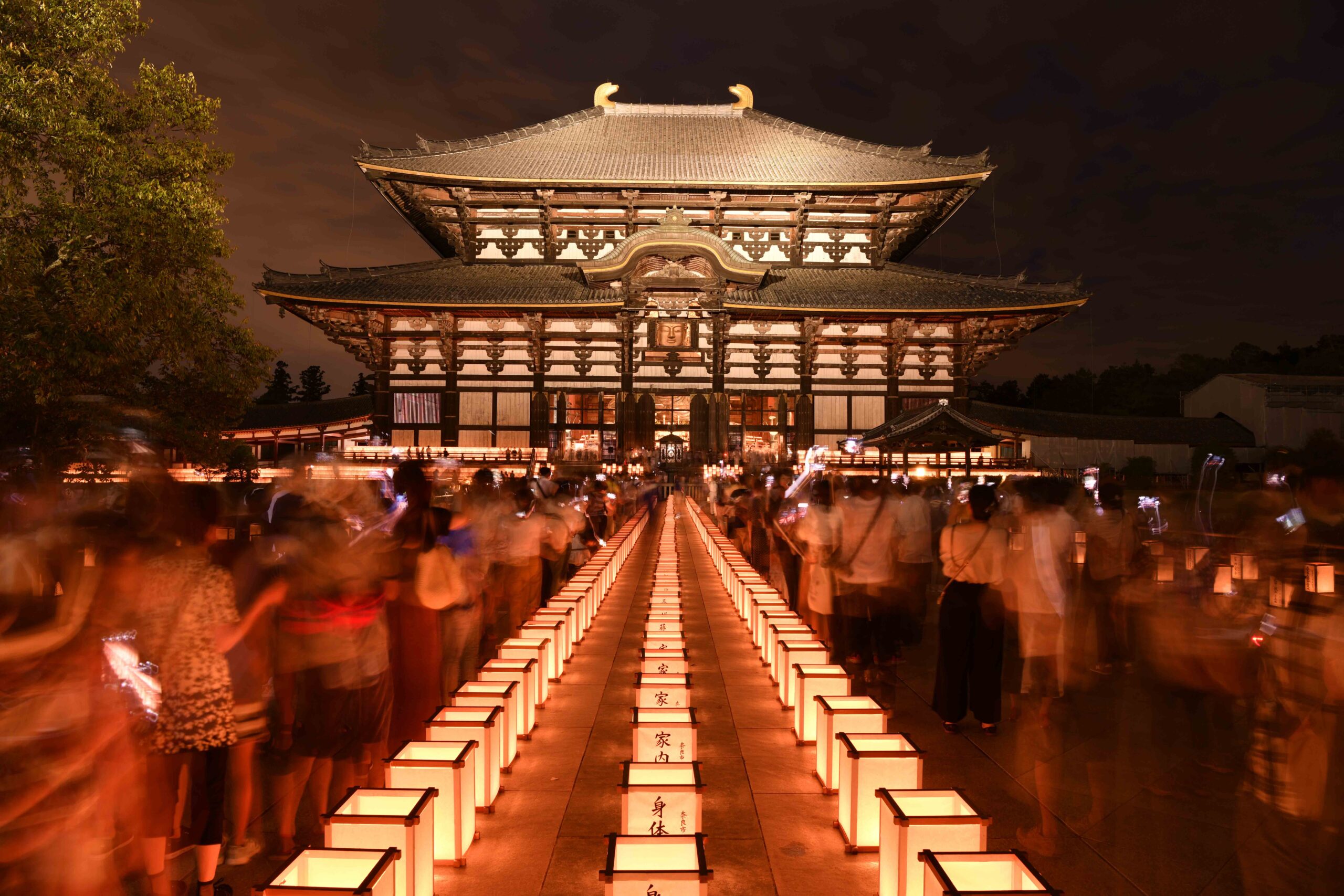 The name “Tegai-e” is said to have originated from the fact that when a deity from Usa Hachimangu Shrine in Ōita prefecture was invited to be a guardian deity for the construction of the Great Buddha of Tōdai-ji Temple. A portable shrine is transferred to the Tegai-mon Gate of Tōdai-ji Temple and used as a resting place. After a Shintō ritual at Tamukeyama Hachimangu Shrine, a further Shintō ritual is held to welcome the portable shrine, Mikoshi, at Tegai-mon Gate and finally a Buddhist service by Tōdai-ji priests is held. In addition, since the Meiji era, the deity, the national treasure, Hachiman in the Guise of a Monk (Sōgyō Hachiman shin zazō), has been enshrined in the Hall of the Hachiman Deity, Kanjin-sho and this secret deity image is specially unveiled on October 5th.
In Amida-dō Hall, Kanjin-sho, The Five Kalpas of Reflection by the Buddha Amida (Gokō shiyui Amida nyorai zazō) and Priest Kōkei (Kōkei Shōnin zazō)

On October 15th 743AD, Emperor Shōmu issued an imperial decree for the construction of the Great Buddha. Commemorating Emperor Shōmu’s vow to create the Great Buddha, a Buddhist service is held, and a Tea ceremony is then offered to Vairocana Buddha by the grand master of the Omotesenke. Details are as follows:

Date & time: From 10:00 on October 15th
Place: Great Buddha Hall
※Please note that during the Buddhist service and tea ceremony, you cannot worship in front of the Great Buddha.

(Noh is a traditional form of theatre where some actors wear masks)
Date & time: From 13:00 on October 15th
Place: Kagami-ike Pond (In case of rain, it is performed at Kinshō Hall)

Butsumyō-e is a traditional Buddhist ritual held on December 14th (from 8:30 to around noon) every year at Nigatsu-dō. Three large scrolls depicting Yakushi Nyorai (manifests in the past), Shaka Nyorai (manifests in the present) and Amida Nyorai (manifests in the future) are hung on the altar in Nigatsu-dō. And each year, monks chant 1,000 Buddha’s names to confess our sins of past, present, and future while performing the Gotai-tohchi 1,000 times (Prostration in which both hands, both legs and head are pressed to the ground). This expresses their heart of repentance through their body. Thus, it will take three years to worship the three thousand Buddhas of the “past,” “present,” and “future. Butsumyō-e service is held to focus in turn on like “the past” this year, “the present” next year, and “the future” the year after that.
16
8:30-
Ceremony of Expounding on the Avatam.saka Sutra
The Anniversary of the death of priest Rōben
Unveil of treasured Buddhist images
Founder’s Hall
Hokke-dō
Shunjō-dō

The anniversary of the death of priest Rōben

On December 16, a memorial service is held on the anniversary of the death of priest Rōben, who served as the first chief abbot of Tōdai-ji Temple at the founder’s hall which is dedicated to Rōben. Rōben, Emperor Shōmu and the monk Gyōki played an important role in the establishment of the temple.